There's a lot of confusion about what 5G does and doesn't mean in terms of human exposure, ranging from the entirely ludicrous (conference papers claiming that 5G will "stimulate skin pain sensors") to the simply bewildered (5G is a new "thing", so that represents a qualitative change in human exposure to RF, right?).

Unlike GSM (2G) or 3G or 4G, 5G isn't a single new radio technology. It's a whole raft of technologies, many similar to those currently in use, some under development and some still at the "thinking about it" stage. The key really is that 5G is intended to be an envelope which allows a lot of different devices and applications to communicate across a range of technologies seamlessly. Kind of the ultimate plug'n'play. The different discrete technologies come into play when we consider each level of communication - from a device or user back to the main backbone of the internet and then back out again. Data now exist already for many of them, and we can make some pretty good assumptions based on the laws of physics and known technologies which allow us to put bounds on the question for each layer. So let's do that. First, let's look at the frequencies used by 5G. There are three bands, low, mid and high.


The picture below shows where these bands sit in the spectrum, and how they match up to existing sources of public exposure to radio. As the graphic shows, 5G doesn't actually represent any new exposure modalities. 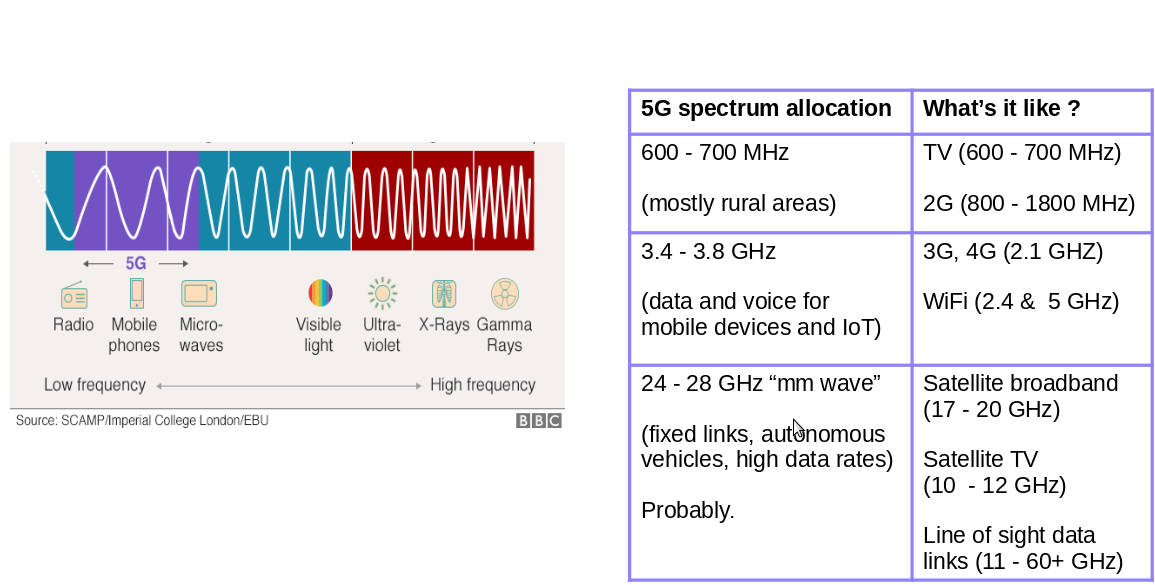 Devices used and/or worn by people

The thing about people is that we move about. We put devices in our pockets, our bags and on top of the fridge, and put our hands - with the smart watch on the wrist  - under the table. Whatever is used for the first communications hop from these devices has to have reasonable penetration of clothing, bags etc and not be too fussy about line-of-sight. That rules out millimetre waves, and that's important. A fair degree of the hype about 5G has been around the idea that it'll all be mm waves, and that this will lead to significant skin exposure of people to those mm waves. That's wrong. It's possible that in some sci fi future we'll have distributed synthesised aperture antennas tracking us from all directions using clever beamshaping and steering to allow mm waves to be used for devices that people carry or wear, but that's not going to get past the real world issue of pockets, handbags and doors, and the time to start worrying about that is if it ever actually happens.

The first hop from devices used or worn by people is most often something very like 3 or 4G or WiFi, the mid-band of 5G at frequencies much like 3G or WiFi (a few GHz) using MIMO (multiple in, multiple out) technologies and carrier/band agglomeration and a couple of other fancy technofixes to get the speeds up. Why's it  like 3G, 4G or WiFi? Because those frequencies don't require line-of-sight and they're really quite robust over short and intermediate distances even when radio propagation conditions are confounded by the strange things people do with their devices. But those distances have to be short to get guaranteed high data rates, so in urban areas we're likely to see a proliferation of very small cells in public spaces and the home to provide good coverage and high throughput. In principle that's not so different from the femtocells and picocells we see with 3G and 4G, though they'll be smarter and faster. But remember these small cells are using frequencies like 3G, not mm wave. And they'll be rather low power.

5G also has a flavour at 600-700 MHz, and this has really quite good range and coverage. In UK at least it will use spectrum freed from the shift from analogue to digital TV, so it's going to look rather like the old TV signal in terms of frequency, but at lower power. That frequency range is going to be most useful for larger cells on higher towers in rural areas with fewer users.  It may also provide some not-especially-fast data services in those rural areas.

One of the drivers for 5G is the (theoretical) rapacious data requirements of IoT. There's no huge need for very fast data in a lot of cases (how much information do you really need from a smart light fitting?) though there will be some fast data requirements, but there's going to be an awful lot of connections between things. This is one place where it really does need to be plug-and-play. You're not going to want to have to set up a dedicated line-of-sight data link to your fridge, or between all the light switches and all the lights in your kitchen. Line-of-sight links won't cut it here, partly because a lot of the IoT things won't have line-of sight to each other or to a hub, but also because this stuff will ship with low cost embedded communications rather than ugly external antennas. That means proven, robust technologies such as WiFi, Bluetooth or ZigBee using either direct-to-a-hub or mesh networking. 5G will not mean mm wave connectivity to domestic appliances. IoT doesn't need huge data rates, and mm waves are far to easily blocked to be practical in that application.

From the small cell/hub back

For most domestic situations, this is going to be your own internet connection. One day we'll all be on optical fibre, right?  For situations where fibre is never going to be a realistic option, such as truly isolated homes or some street furniture installations, line-of-sight data links are an option - and these will use mm wave (or at least, > 20 GHz which is almost the same thing). That's mostly no different from the technology used to link many 3G and 4G cells into the backbone, or for dedicated line-of-sight data links of a type that have been used for decades. One difference may be that rather than traditional point-to-point it may use point-to-multipoint, with each small cell talking back to a single larger cell, with the larger cell using MIMO and synthesised aperture technology rather than wide-area broadcast (which is a bit pointless with mm waves).

From the large cell back

This will be just like the backhaul from a 3G/4G base station, using either > 20 GHz/mm wave line-of-sight data links or a fibre connection.

So what about millimetre wave?

Millimetre wave is certainly a component of 5G, but it's mostly going to be for backhaul applications, much as it is for 3G and 4G (although probably more of it, at lower powers) and for data links to stationary devices. In terms of the final hop to phones and waerable tech,  well, there's a lot of talk about mm wave small cells and even some trial installations, but - as discussed in "Devices used and/or worn by people" above - it's not a core requirement of 5G, and the practical difficulties currently look pretty severe. Certainly there will be some quite specialised applications, such as communications with vehicles, where point-to-multipoint cell antennas mounted high above roads could track and communicate with high-gain directional antennas on moving vehicles, and possible some indoors point-to-fixed-multipoint low power datalinks to specific things like desktop computers or portables in fixed locations, but it's going to be hard to beat gigabit ethernet for that application, at least for now, if you want a solid data rate. It remains difficult to see it as a technology that could connect hand-held or wearable devices.

What does all that mean for human exposure?

The big change that will come with 5G will be the proliferation of low-power sources in urban areas. With 2G we saw comparatively few high power base stations; 3 and 4G meant more - but much lower power - small cells. 5G will continue that trend, not only with phone technologies, but also data nodes and IoT hubs in the home. This is most likely going to be, in terms of human exposure, much like 3G and WiFi albeit at much lower levels and in many more places.

Does that mean higher exposure? No. This is a common misconception. It's likely to be lower in reality. Why? well, consider that a device at the edge of cell needs a certain signal strength to connect. That minimum signal strength is the same whether the device is on the edge of a large cell or a small cell. Since small cells are perhaps ten metres across and large cells can be kms, and the power requirements vary as the square of distance to the cell boundary, the power in used a large cell will be thousands of times higher and so exposure levels inside the large cell will be (in general) larger than in the small cell. Consider a landscape of a thousand molehills vs a single large mountain. Which has the highest average altitude?