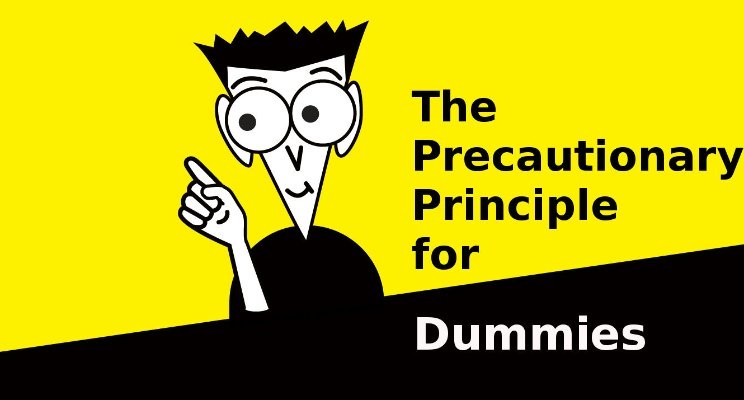 How often do we hear "I think there's a problem -> Invoke the Precautionary Principle and Stop it Now!!!" ?

It doesn't work that way.

The Precautionary Principle in fact is a well-grounded legalistic tool, to the extent that in Europe at least one does not invoke it on a case-by-case basis but rather must always use it. Using it, though, doesn't mean you always have to take action, and that's an important distinction.

The PP (let's call it that from now on because it's easier to type) really is just common sense. It's rooted in what we mean by "proof"; commonly we use a 95% confidence interval in science, which means we have to be pretty sure of something before we consider it "proven". Now, that's fine if we're looking for gravitational waves from coalescing black holes (though for the Higgs boson they used 5-sigma) but it's not really appropriate for environmental agents, where you'd want to be a bit more, well, cautious. There's quite a good analogy in law, where for a criminal conviction we look for "proven beyond reasonable doubt" but in a civil case it's "balance-of-probabilities" or "more-likely-then-not".

So for the PP, you would consider taking action if it looks more likely than not that inaction could lead to significant harm even if there's not proof beyond reasonable doubt, or proof at 95% scientific confidence levels or whatever. One issue with that is that "balance of probabilities" is something that shifts with evidence; if you're pouring stuff in a lake that you know is toxic to fish, you shouldn't wait until you start seeing dead fish to decide it's more likely than not that you're killing them. That would be a reasonable assumption based on what you know about the stuff you're pouring in. It's actually pretty likely that if you pour enough of it in, fish will die. You really hardly need the PP to tell you not to do it. Where it really comes into play properly is when you either don't know anything much (new agent on the block) or you know enough to know that something is probably (but not definitely) a problem. The second of those is the easier case to start to deal with: it's time to consider action. The first is actually quite difficult, because if you don't know anything at all, what's the balance of probabilities? It then usually comes down to a pragmatic decision about outcomes. Which leads to the second misunderstanding about the PP.

The PP is not a blank cheque to take action to ban an agent or prevent an activity. If the balance of probabilities suggests that it's time to do something, the something you do is take a look at what's an appropriate action to take. That means balancing the costs and benefits of any action against the costs (and potential benefits) of doing nothing. By "costs" here we don't really mean financial costs (though that may also be a factor) but more any societal or personal detriment accruing from action or inaction. That's quite hard to appreciate unless you see a concrete example, so here is one.

Across the years, and across many epidemiological studies, there has been an association between magnetic field exposure above 0.4 uT and an increased risk of childhood leukaemia. It's not established as causative, it's an association, but it seems quite robust. Largely as a result of this finding, IARC assigned a 2B category ("possible carcinogen") to power frequency fields in 2002. Now "possible" doesn't meet the PP threshold of more-likely-than-not, so one wouldn't expect a public health-driven change to the way we distribute or use electricity. Nevertheless, it makes for an interesting case study in "what if"; In the UK the SAGE process considered what would be appropriate to do in terms of remedial action if one took as axiomatic a doubling of risk of childhood leukaemia as indicated in the epidemiological studies. The answer was "almost nothing". Some obvious measures like not routing cables over schools where an equal-cost alternative is available, and arranging the phases of conductor bundles to minimise fields emerged as no-brainers, but actions such as moving existing lines or relocating people who lived under them turned out to be too hard to justify, not just in terms of financial cost but in terms of lives: people are injured and die (statistically) when major engineering works take place.